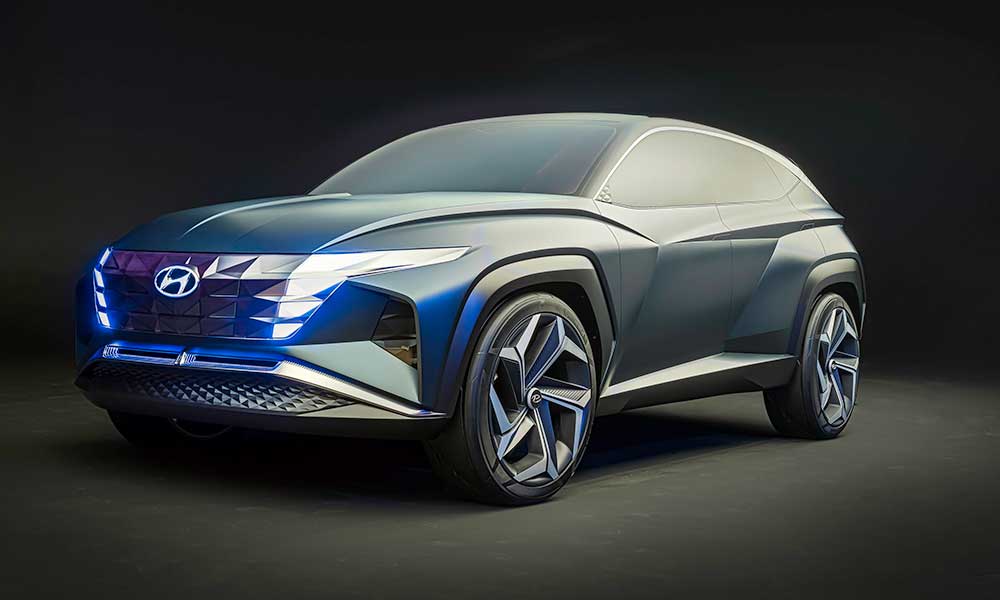 Hyundai presented 4th Tucson crossover generations, with a revolutionary design exterior and interior. The premiere of the novelty took place in online format due to considerations security.

Local sales market cars will start in September, to European dealers Tucson will get there at the start of 2021 year, the model is also announced for Russia.

The 4th generation Tucson changed a lot externally, despite the fact that the car resembles a concept car, this is a serial crossover.

Crossover design received features of the Vision concept car that was presented at the end of last year at auto show in Los Angeles.

Korean new corporate identity the brand is called Parametric Dynamics “Parametric dynamics”, it is read in the sidewall relief made up of numerous broken lines, front doors unites at once several faces, and massive wheel arches are made in a rectangular shape, looks no less complicated front part with complex boomerang optics, which is visually combined with radiator grill and consists of trapezoidal elements, they are not visible when they are off, blocks main headlights are located below, which are disguised under fog lights, from behind the car stands out”Fanged” lanterns, united among themselves luminous strip.

The body can now have two-tone color with contrasting roof, optionally wheels diameters from 17 to 19 inches, Tuscon is built on a new platform with McPherson struts front and multi-link behind.

Steering gear – with electric power on the rail, the car will sold around the world with two wheelbase options, The difference in distance between two axles will be 75mm, but relatively per-reform crossover models have grown in size, In length, width and it reaches a height of 4500, 1865 and 1650 millimeters, respectively, that is, by 20 millimeters longer, 15 wider and 5 above the previous crossover, due to what has become more spacious: for example, passengers second row added 26 millimeters free space in the area knees, interior of the new Tuscon completed to match the exterior of revolutionary solutions in the interior – virtual diagonal dashboard 10.25 inches, which is missing visor and touchscreen multimedia system made as a single block (8 or 10.25 inches and touch three-zone control panel climate control (nano basic crossover simple radio tape recorder, with physical buttons and washers for “Climate”), there is a contour illumination for 64 colors and additional hidden air deflectors, the central tunnel is two-level, and instead of the traditional box lever set push-button panel, Trunk volume for European crossover with petrol motor – from 620 liters “under shutter “up to 1799 liters with folded back row, In addition, Tucson has acquired an unusual airbag, which unfolds between the driver and front passenger, the list of equipment includes seven airbags(considering the central one), front seats with function ventilation and rear heating sofa, depending on the market the model is equipped with an audio system Bose or Krell.

The new Tucson is equipped with adaptive cruise control systems self-braking with recognition pedestrians monitoring blind spots and retention in the strip, as well as camera sall-round view and car park, plus up to 27 m can be controlled some car functions from smartphone – open / close doors, start the engine and manage climate control.

The basic motors of the new Tucson steel petrol turbo four1.6 150 horsepower forces and diesel CRDi Smart stream such the same volume that develops 115 forces. Both units are combined with a six-speed manual transmission, In addition, for them is available 48-volt superstructure:”Soft” hybrids produce 150 or 180 forces (based on gasoline1.6) and 136 forces (diesel 1.6), For them, an innovative “Mechanics” iMT (pedal mechanically not related to clutch) and seven-speed pre-selective “robot”, front-wheel drive or full with clutch at the back axis, for all-wheel drive cars among driving electronics modes added off-road Mud, sand and Snow installations.

Top engine for the market USA is a 190-horsepower gasoline unit with a volume of 2.5 liters.Prepared for South Korea two-liter motor with recoil186 forces, both work in tandem with an eight-band “Automatic”, also in the motor range includes a 150-strong “atmospheric”.

Later, in 2021, Tucson will acquire 265-strong hybrid modification with recharge function – it will become the most powerful in the line, and even before the end of this of the year will debut Tucson N Line with original decor outside and inside.

did you like the new a bold Tucson design? or do you like more conservative pre-reform, let us know in the comments section.